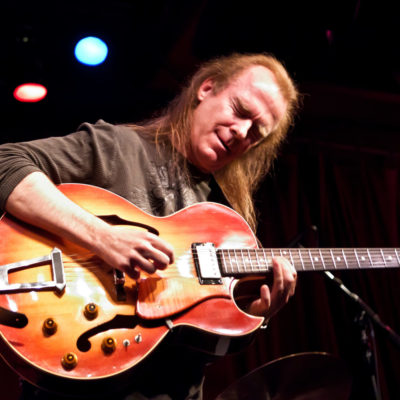 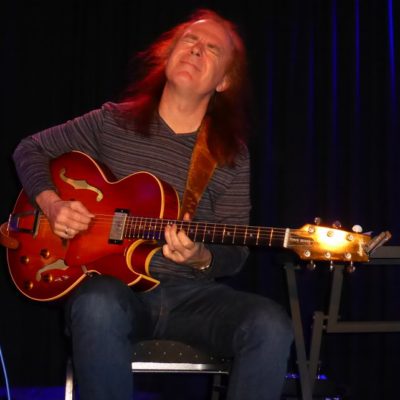 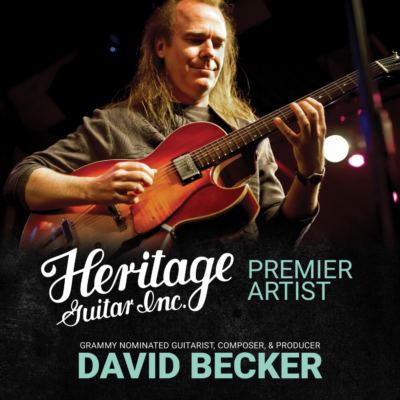 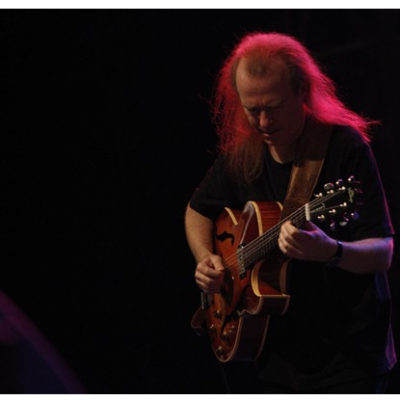 For more than three decades, Grammy and Emmy nominated guitarist, composer and producer David Becker has continued to define himself as one of the best and most unique voices in jazz and contemporary music by combining diverse influences and a passion for the new and different, and his ability to play for the present while always keeping an eye on the past and future. He has led the critically acclaimed DAVID BECKER TRIBUNE to a worldwide audience by performing in more than 26 countries.

David Becker graduated from Musicians Institute in 1981 at age 19 and by age 22 he was touring the globe with the David Becker Tribune. David signed with MCA records in 1986 and the first DBT release LONG PETER MADSEN debuted. Siberian Express (#1 R&R) followed in 1988 and the DBT established themselves in the world of Contemporary Jazz performing in 44 of the 50 US states.

In 2005, Becker released a duo effort with guitar master Joe Diorio, THE COLOR OF SOUND. The CD was called “One of the best Guitar duo recordings of all time.” LEAVING ARGENTINA from 2007 received high praise by the international press. Down Beat gave it “4 Stars” and the BBC said,” Brilliant musicianship. A really lovely album, in fact”. David’s music has been played on radio and television around the globe including ARD, The Weather Channel, Voice of America, XM and Sirius Radio, NPR, Europa Plus, and AEI In-Flight Entertainment.

David Becker has also performed with guitar greats such as Attila Zoller, Larry Coryell, John Abercrombie and Kenny Burrell. He has released three instructional books called GETTING YOUR IMPROVISING INTO SHAPE (Mel Bay/Acoustic Music), PLAYING IN SHAPES (FingerPrint) and RHYTHMIC MOTIFS FOR COMPING AND SOLOING (FingerPrint). His books have been top sellers and received great reviews all over the globe. The books are available in English and German. He has performed master classes and workshops around the world including, UNT in Denton, U of Arts in Philadelphia, Strathclyde University, Glasgow, Conservatorium, Maastricht, Hochschule, Köln, Music Tech College, St.Paul, Guitar Summer Workshop, Freiburg, Academy of Contemporary Music, Zurich, Musicians Institute, Hollywood and USC Thornton School of Music.

With the release of the highly personal and critically acclaimed recording BATAVIA in 2010, Becker crossed the border of musician and has become an advocate for the forgotten WW II Dutch POW’s in Indonesia. BATAVIA was ranked as one of the top 10 World Music recordings of 2010, and continues to receive praise around the globe. The DBT has continued to perform the songs live to further tell the forgotten stories of the POW’s which included his family. Additional projects for 2013/2014 included the TODD WALLIN PROJECT/featuring DAVID BECKER, which David produced and co-composed many of the tracks. The single, “Spring Fling” received steady airplay. And the critically acclaimed DBT release DISTANCE TRAVELED which made it into the CMJ Jazz top 20.

In 2015, The Heritage “David Becker” Signature 575 guitar was unveiled at NAMM. Two new recording projects were released. A solo outing “The Lonely Road” (Acoustic Music Records) and a tribute to Attila Zoller “Message to Attila” (ENJA) which features Ron Carter, Pat Metheny, Mike Stern, John Abercrombie, Peter Bernstein and more. Also the new David Becker instructional video “Transitions to Jazz” was released by True Fire and has been in the top 10 most popular videos since its release. “The Lonely Road” reached #30 on the iTunes Instrumental top 100 charts and was called, “One of the best solo guitar CD’s available today”, by Amazon U.K.

November 2016 marked the 30th anniversary of the DBT debut release, “Long Peter Madsen”. In celebration, the DBT performed two concerts in New Zealand and both shows were recorded for a “Live” CD/DVD to be released in 2017/2018.