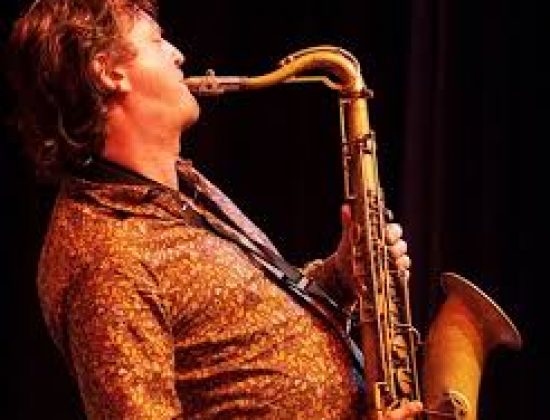 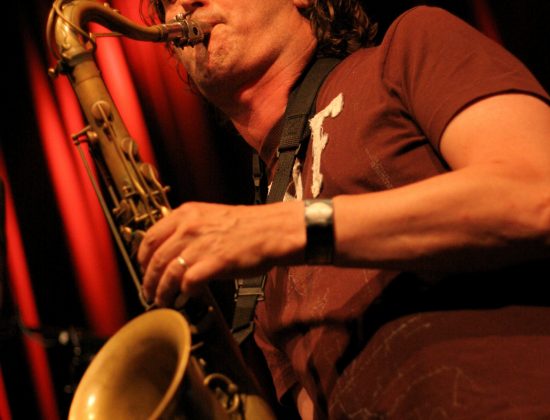 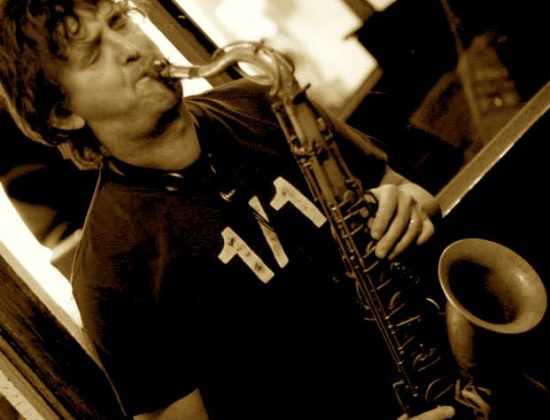 An award winning Uk jazz saxophonist/composer who has been based in London for over 25 years. He works in the UK and internationally with a wide range of his own projects and collaborations.
His experience as a sideman reflects his diverse musical interests: He has worked with Free jazz pioneers John Stevens,Evan Parker.US Jazz Legends Horace Silver, George Benson, Dianne Reeves, Dr Lonnie Smith, Charles Earland, and Clifford Jarvis. Leading Uk Jazz Musicians such as Dick Heckstall-Smith, District Six, Jason Rebello, Orphy Robinson, Claire Martin, Don Weller, Byron Wallen, Tim Richard’s Great Spirit, Damon Brown, Monk Liberation Front ,Jonathan Gee, Larry Bartley’s Justus. As a session musician he has performed and recorded with crossover projects such as Incognito, Us3, Jamie Cullum , Terry Callier, and Nostalgia 77, through to R/B legends such as D’Angelo, Bootsy Collins, Chaka Khan Tina Turner, Carlene Anderson, Noel Mccoy and Omar.
He formed his first group “Ed Jones Quartet” in 1987. They were the first band to play at the original Jazz Cafe London.He became a regular performer on the emerging Acid Jazz scene at clubs such as The Wag and Dingwalls, and was signed by Giles Peterson recording his first album ”The Homecoming” (Acid Jazz, 1989).
During the 1990’s he formed new groups, toured the Uk and Europe and recorded a further 3 critically acclaimed solo albums”Pipers Tales” (ASC, 1995).”Out Here” (ASC, 1997).”Seven Moments” (ASC 2002).
His 5th album “A view from the…” featuring the ed/ge project was released in spring 2004. This was a Hip/Hop/Beats/ Big Band collaboration with US3 programmer/producer Geoff Wilkinson.

In 2005 he formed Killer Shrimp (co-led) with Trumpeter Damon Brown. The group recorded the highly acclaimed Sincerely Whatever (33 records) in 2006 mixing dance genres and electronica with acoustic jazz. The cd was top of many critics best of list that year and was nominated for Jazz cd of the year 2007 parliamentary jazz awards. The group were awarded Best Jazz Ensemble 2007 at the same awards, and in 2010 released their follow up album Whatever Sincerely(Tales from the Baltic Wharf).
In 2016 he formed the Free Improvisation Trio Bad Ash with Mark Sanders (Drums) and Mark Lewandowski (Double Bass) and the group toured the Uk with support from The Arts Council Of England with collaborations along the way with Matt Bourne, Paul Dunmall, Corey Mwamba,Alex Bonney and Nick Malcom.
He also works internationally with Scandinavian Trio Stekpana, Finnish trumpeter and composer Mika Myllari and Tokyo-London Jazz connection with Yutaka Shina (piano).
Londonjazznews.com recently included two of his 2016 concerts in their best of year performances.

He has received numerous composition commissions including:
BBC Jazz on 3 and Bath Festival to write and perform with a 10 piece Uk/Scandinavian electro/acoustic ensemble Burn,(co-led with Finnish Trumpeter Mika Myllari)(2000)
Southern Arts to write and record a suite for woodwinds/piano/beats/electronics inspired by the work of the
English painter Francis Bacon entitled “Triptych (3 accidents)”(2004)
British Council to compose and perform 1000 Plateaus based on the writings of Gilles Deleuze as part of Expo 2005 in Japan.
Most recently in 2014 a commission from London Jazz Festival in collaboration with The Guildhall School Of Music Jazz Orchestra. In 2016 Leeds College Of Music Jazz Orchestra Commissioned a new suite of compositions entitled “Pathways”

A Committed Educator, Ed is currently a Principal Lecturer on the Undergraduate and Post Graduate Jazz and Popular Music Courses at Leeds College Of Music and Saxophone/Ensemble tutor for The Yamaha Jazz Summer School at Falmouth University.

Ed currently leads a new acoustic contemporary jazz quartet which is currently touring and recording. This newish quartet features some of the Uk’s finest creative jazz musicians. Pianist Ross Stanley is just about everyones first call these days, leading to work recently with US sax giant Seamus Blake.Bassist Riaan Vosloo leads his acclaimed 12‘s Trio,and collaborates with the likes of Nostalgia 77,Keith Tippett,and Richard Fairhurst. Drummer Tim Gilles won the Daily Telegraph Young Composer of the Year Award in 1992 at the age of 12 and has gone on to work with Stan Sulzmann, Iain Ballamy, Julian Arguelles,and Tom Arthurs as well co-leading his award winning group Fraud with saxophonist James Alsop

”A formidable saxophonist. Ed Jones may have hit his highest profile through his work with bands US3 and Incognito, but he’s an improviser to his fingertips, a player of forceful imagination, and one of the Uk’s most distinctive saxophonists.” John Fordham The Guardian.
”The Vigorous, sometimes downright volcanic tenor sound of Ed Jones has long been one of the great live delights of British Jazz. His barnstorming ‘terrier with a rat’ approach raises the musics temperature whenever he solos“. Chris Parker, Jazzwise.
“One of the most fluent and forceful saxophonists in Europe” Jack Massarik Evening Standard ”One of Europes most exciting and inovative bandleaders”-BBC Music Magazine
“Risk taking arrangements and compositions, seriously engaging territory” Tom Barlow Jazz wise
“Inventive, physical, full of life, on the edge and unmistakably of today” Chris May, All about Jazz
“For Best gigs of 2016 twice this year – at the 606 with Killer Shrimp and a low-key pub gig – from someone with his ‘out’ image, the most imaginative and exciting evenings of song book and jazz standards I have heard in years. – Brian Blain LondonJazzNews.com