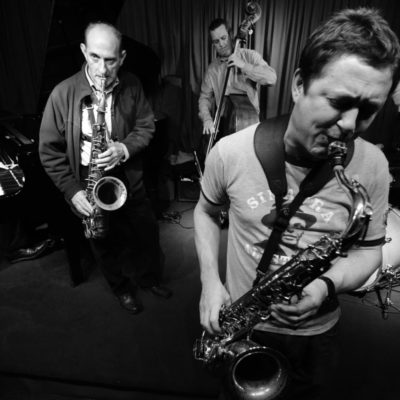 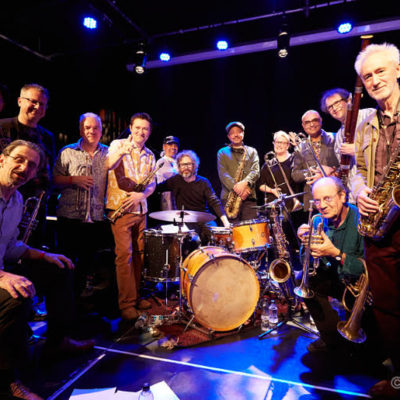 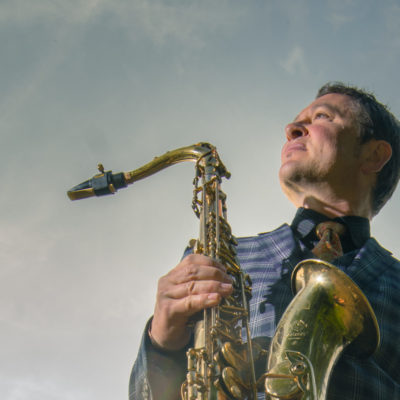 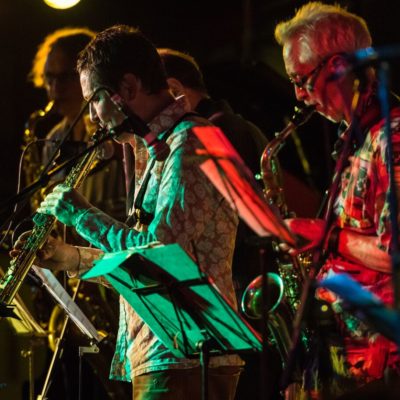 Albums such as ‘Mountain People’, ‘Heavy Plant Crossing’, and ‘Food Of Love’ were built around Julian’s compositions. The current line-up of the band is perfect for the cross-genre melodies and grooves long associated with Julian’s style.

Performing with Julian are:
Imogen Ryall – vocals and lyrics
Mark Edwards/ Simon Robinson – piano and keyboards
Tim Robertson – upright bass and electric bass
Darren A. Beckett – drums
*
Saxophonist, composer and bandleader, Julian Nicholas has recently been heard on Radio 3, recorded live from Ronnie Scott’s with the great ‘Loose Tubes’, with ‘The Cloggz’, recorded at the South Coast Jazz Festival, and with Claire Martin, recorded at The Barbican.
*
He leads the 2-yr Jazz Foundation at Chichester College, co-curates the South Coast Jazz Festival with Claire Martin O.B.E., and has a B.A.F.T.A. nomination to his name.
*
The legendary Bobby Wellins says of him “…his beautiful and creative playing makes Julian one of my favourite tenor saxophonists.”
Nina Simone requested that Julian support her for a second year running at ‘The Dome’, Brighton Festival 1991.
*
He has recorded/ performed/ toured with among others, Claire Martin, Carleen Anderson, Loose Tubes, The Cloggz, Bobby Wellins, Stan Tracey, Harry “Sweets” Edison, Emil Viklicky, Liane Carroll, Eddie Parker.
*

Here’s what the press have to say about Julian:

“Julian Nicholas is a saxophonist of not only great technical prowess but also delicacy of expression and intensity of feeling…….he has exciting and expressive qualities alongside a faultless technique.” Tony Hall – The Times

“Twenty years on, in short, a great deal of British jazz sounds like Loose Tubes’ music: quirky, adventurous, punchy, original, occasionally laced with irony and/or whimsy, partly because the likes of Mark Lockheart, Iain Ballamy, Django Bates, Eddie Parker, Chris Batchelor, John Parricelli, Martin France and Julian Nicholas have been at the heart of the UK scene during that period, but also because the original 21-piece band opened up, courtesy of its refreshing and good-humoured refusal to be exclusively influenced by the US jazz template, musical territory that is still being explored by bands in the new millennium.” – Vortex Reviews