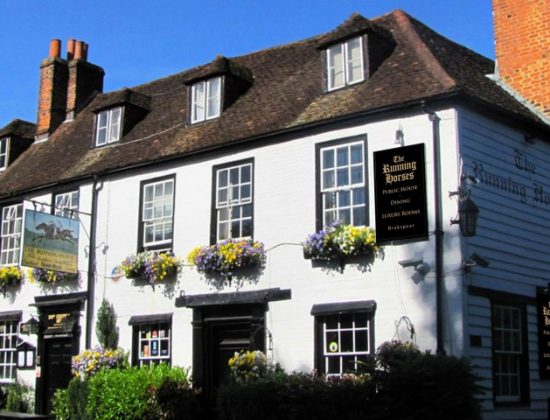 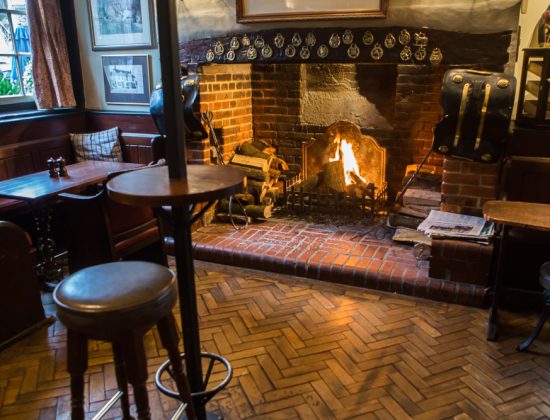 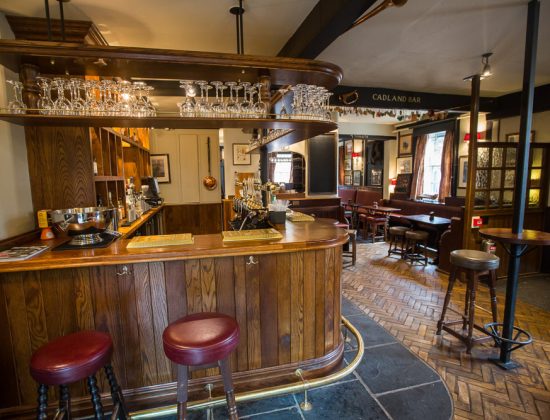 The Running Horses stands on Old London Road, at the centre of pretty Mickleham village. Opposite, is the ancient church of St Michael, which is mentioned in the Domesday book. We’re surrounded by history and we have a few fascinating tales of our own to tell.

Most people agree that the inn was built in the 16th century. Architectural historians discovered original brickwork features that can still be seen in the cellar. It’s thought the land it stands on may once have been part of Mickleham Manor. The house first belonged to Thomas Stydolf who died in 1546, and whose family owned much of the surrounding countryside.

Following improvements in 1755, Old London Road became the main route from London to Brighton. The Running Horses had an important role as a coaching inn and post house. Merchants and gentry, taking advantage of the fast new road, would have mingled in the inn’s bars and restaurant. However, characters of more unsavoury kind would have found the road a prime business route too. Highwaymen were the scourge of 16th century travellers and a tiny ladder leading to the roof space was discovered when the bedrooms were added, and it was thought to be a highwayman’s escape route.

In the days before rail travel, the inn was a favourite stabling for horses racing at Epsom. And up until recently, there were training gallops on Mickleham Downs. At one point in its history, the inn was called The Chequers. It was renamed The Running Horses in 1828 because of a famous incident at the Epsom Derby of that year. Two horses, Colonel and Cadland both passed the post at exactly the same moment and the race became known as the ‘Dead Heat Derby’. You’ll see portraits of Colonel and Cadland, one on each side of the inn’s sign, and each of our two bars is named after them.

Fancy a bit of filth? Get your mind out of the gutter, you saucepot you, we’re talking about our down n’ dirty Gin & Jazz Evening, coming to The Running Horses’ monthly.

There’ll be live Jazz music to help you get well and truly in the swing of things from 8pm. Don your Friday finest and come on down to join the party.

LAST FRIDAY OF EVERY MONTH

Show all
We use cookies to ensure that we give you the best experience on our website. This includes cookies from third party social media websites if you visit a page which contains embedded content from social media. Such third party cookies may track your use of the JazzConnects website. If you continue without changing your settings, we'll assume that you are happy to receive all cookies on the JazzConnects website. However, you can change your cookie settings at any time.OkRead more