This story is posted in partnership with Jazzwise

The EFG London Jazz Festival, which runs from 15 to 24 November, will feature the premiere of a new multi-media music and dance project from award-winning saxophonist and MC, Soweto Kinch, which will be performed at EartH, Hackney on 22 November. Entitled The Black Peril, the conceptual piece is inspired by the turbulent century of race relations and cultural clashes 100 years after the post-war ‘Red Summer’ riots of 1919 in the US and UK, seeking to tackle many of the thorny sociopolitical issues that still remain pertinent today. Reimagining ragtime, proto-jazz, West Indian folk music and the classical works from black composers of the period via hip hop and contemporary sounds, the music will be performed by a high-calibre 14-piece ensemble including musicians from the London Symphony Orchestra, Chicago jazz stars Makaya McCraven and Junius Paul as well as dance choreographed by rising star Jade Hackett, all against a backdrop of news and archive film footage from 1919. An album of the music will be released early next year, with Kinch set to tour the project in the Spring of 2020. 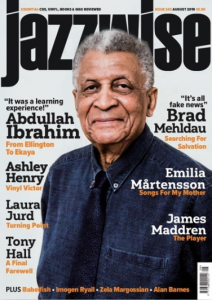 Jazzwise, the UK’s biggest selling jazz monthly and the leading English language jazz magazine in Europe, has changed the way jazz magazines look and think with a stunning editorial and design package that reaches out to both the new jazz audience and established fans – qualities that have led to it winning Jazz Publication of the Year at both the Parliamentary Jazz Awards and the Ronnie Scott’s Jazz Awards, and Best Jazz Media at the 2013 Jazz FM Awards.

Every month Jazzwise’s acclaimed team of writers takes you on the journey of your life: from the cutting edge of contemporary jazz, mainstream, fusion and free-jazz to jazz electronica and world music with hot news, gossip, nationwide gig guide, major features and the UK’s most authoritative reviews section. From the outer edges to the inner circles Jazzwise is committed to discovering new talent as well as extensive coverage of today’s scene and expansive retrospectives of jazz’s vibrant past. You simply can’t afford to be without it.